LumiThera listed as 1 of 10 Startups to Watch

LumiThera is a Poulsbo-based medical device company that harnesses the healing power of light. Founded by Clark E. Tedford, Ph.D. and a team of two eye doctors and two engineers, LumiThera was conceived with the goal of developing a noninvasive treatment for degenerative eye disease.

Tedford has more than 30 years of experience in the pharmaceutical and medical device industry, where he has helped develop both drugs and devices. He first worked with the photobiomodulation technology that powers the startup’s Valeda technology while researching treatments for degenerative brain diseases such as Parkinson’s and Alzheimer’s, as well as impairments related to stroke. 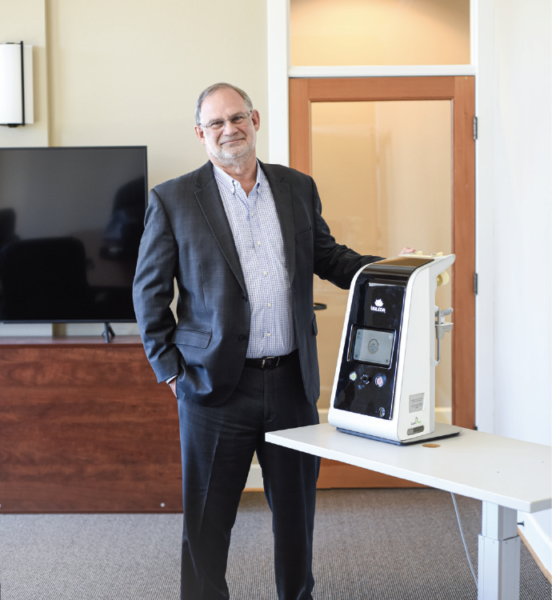 While working as the chief science officer at Seattle’s PhotoThera, Tedford was approached by two eye doctors about potential uses of photobiomodulation — a technology that uses light to stimulate cells, improving energy production and blood flow — to treat degenerative eye disease. At the time, Tedford was unable to take on the commitment. But a year later, the doctors presented a small study at a conference demonstrating improvements in patients’ vision using photobiomodulation. Tedford was intrigued and learned that one of the doctors had relocated just down the road — to Bainbridge Island.

The two came together to form LumiThera shortly afterward, in April 2013.

LumiThera’s flagship product is its Valeda Light Delivery System, a device that uses photobiomodulation to treat dry age-related macular degeneration (dry AMD), the leading cause of blindness for adults ages 60 and older. Tedford said the disease can be quite debilitating.

“You lose your ability to drive a car, your ability to have conversations across the table from people because you have difficulty seeing them, to read a book. So, the quality of life becomes very impacted by this disease.” Currently, dry AMD has no recognized treatment.

Valeda works to counter the disease using a noninvasive light therapy to stimulate cells in the back of the eye. The goal is to stimulate and strengthen tissue to make it healthier. Ideally, the treatment would be used to address degenerative diseases before irreversible vision loss happens.

The device’s earliest prototypes were developed with funding from the Life Sciences Discovery Fund. Funding continued through the National Institutes of Health’s National Eye Institute. Another $1.5 million grant from the institute, awarded in August, will allow the team to expand its research into diabetic retinopathy.

The Valeda system was approved for treatment in Europe in 2018. The following year, the team started treating patients in five European countries as part of a trial and in select retinal centers throughout Europe. The company is currently enrolling U.S. patients in another study. In July, LumiThera closed a Series C round of funding to complete its clinical trial enrollment and pursue regulatory approval in the United States. Its European sister study is ongoing and will have results by early 2021.